Awe-inspired at Angkor in Cambodia

Sometimes when you visit iconic places you have an other-worldly experience.  Visiting the temples of Angkor in Cambodia gave me that spine-tingling goosebump-inducing feeling.

Deep in the jungles of northern Cambodia, spread out over four hundred square kilometres, is the vast Buddhist temple complex Angkor Wat.

I remember reading about the ruins of Angkor Wat but I had no idea how truly spectacular they would be. I also didn’t realise how huge complex was and it comes as no surprise that in Khymer Angkor Wat roughly translates as “City of Temples”.

Believed to be the largest religious monument in the world, Angkor is not just one building, but scores of temples. Initially dedicated to the Hindu god Vishnu, the temple gradually transformed to Buddhist. Sketch of Angkor Wat in from my Cambodian sketchbook

The Khmer empire was the largest continuous empire of South East Asia. It ran from 802 CE when King Jayavarman II declared himself chakravartin (or “king of kings”) and ended with the fall of the empire  in the 15th century.  Angkor was was the former capital of the Khmer Empire.

The temple complex was built in the first half of the 12th century by Emperor Suryavarman II. He built the temple city to symbolize the strength of the Khmer Empire. Initially built as a Hindu temple, dedicated to Vishnu, it later became a Buddhist temple.

After the empire ended the jungle swallowed Angkor and for 400 years the temples remained hidden.

The ruins were rediscovered in 1850 by French missionary Father Charles-Emile Bouillevaux, who published an account of his two days at Angkor Wat

In 1992 Angkor Wat was designated as a UNESCO World Heritage Site.

Now in the 21st century Angkor finds itself in a Catch 22 situation. Conservationists and architects working at the site are in a quandary as to how to deal with the trees covering the temples.  These hauntingly aesthetic ruins, covered in trees, may be magical for the tourists but are a nightmare for the people working to preserve the ruins of Angkor. The roots of the trees split walls and crush intricate carvings but simultaneously are also holding the carvings and larger stones together; remove the trees and the buildings are likely to collapse.

What to see at Angkor Wat

Angkor Wat Central Complex – This consists of three storeys, each made of laterite, which enclose a square surrounded by interlinked passages. Along the walls more than 3000 enchanting apsaras (heavenly nymphs) carved into the walls. The Gallery of a Thousand Buddhas was used to house hundreds of Buddha images before the war, but many of these were removed or stolen, leaving just the handful we see today. Make sure you don’t miss the opportunity to see Angkor Wat at sunrise. South Gate – This is the most famous gate of the temple complex, probably because it is situated on the only road between Angkor Wat and the Bayon.

The Bayon in Angkor Thom – The Bayon is a Buddhist shrine with 216 smiling, serene faces carved onto its gigantic towers. The faces are the 54 towers of the temple’s upper level – each with a face facing north, south, east and west high above the canopy of the jungle. Ta Prohm – Ta Prohm is arguably the most atmospheric ruin at Angkor. Fig, banyan and kapok trees spread their gigantic roots over the crumbling towers and ancient walls. It is almost as if the trees are strangling the carvings beneath. The appeal of Ta Prohm is that, unlike the other monuments of Angkor, it has been left been swallowed by the jungle; it looks very much the way most of the monuments of Angkor appeared when European explorers first stumbled upon them. Preah Khan – Preah Khan is one of the larger temple complexes within the historic park. Its appeal is that similar to Ta Prohm in that it still largely unrestored with trees eerily growing over ruined arches and doorways.

The problem with tourists

Although my experience of Angkor was magical, there was one frustrating thing which did happen during my three-day visit.

One of the problems about visiting famous places around the world is that there are always lots of people visiting too… and before you say it, yes I’m a tourist who is complaining about tourists.

While wandering around the atmospheric ruins of the Bayon I was imagining what it must have been like discovering the ruins for the first time. But as I got into my intrepid discoverer mode a tall and stocky man from the USA appeared and started a conversation with me. He finished his somewhat one-way dialogue with the line: “The thing about Angkor is it just get’s better and better.”  In that moment the balloon had been burst and the moment gone.

Admittedly if this had happened once I could have still found another secluded spot and fired up my imagination. But call it a coincidence, I prefer to call it sod’s law, but wherever I went over those three days on the vast temple complex at Angkor, he would also appear and every time would smile, shake his head in a totally overwhelmed way and say the line, ‘Wow, it just get’s better and better’.

I think there needs to be a rule in tourism about saying inane comments to other people just to be polite or avoid an awkward silence. When I am visiting an amazing-place-that-I-will-never-get-another-chance-to-visit-ever, I don’t need to make polite chit chat, I just want to have a moment of mindfulness. Whenever I now see any of the Angkor ruins, there is a little voice in the back of my mind which says: ‘wow, they just get better and better.’

A selection of my photographs from Angkor Wat 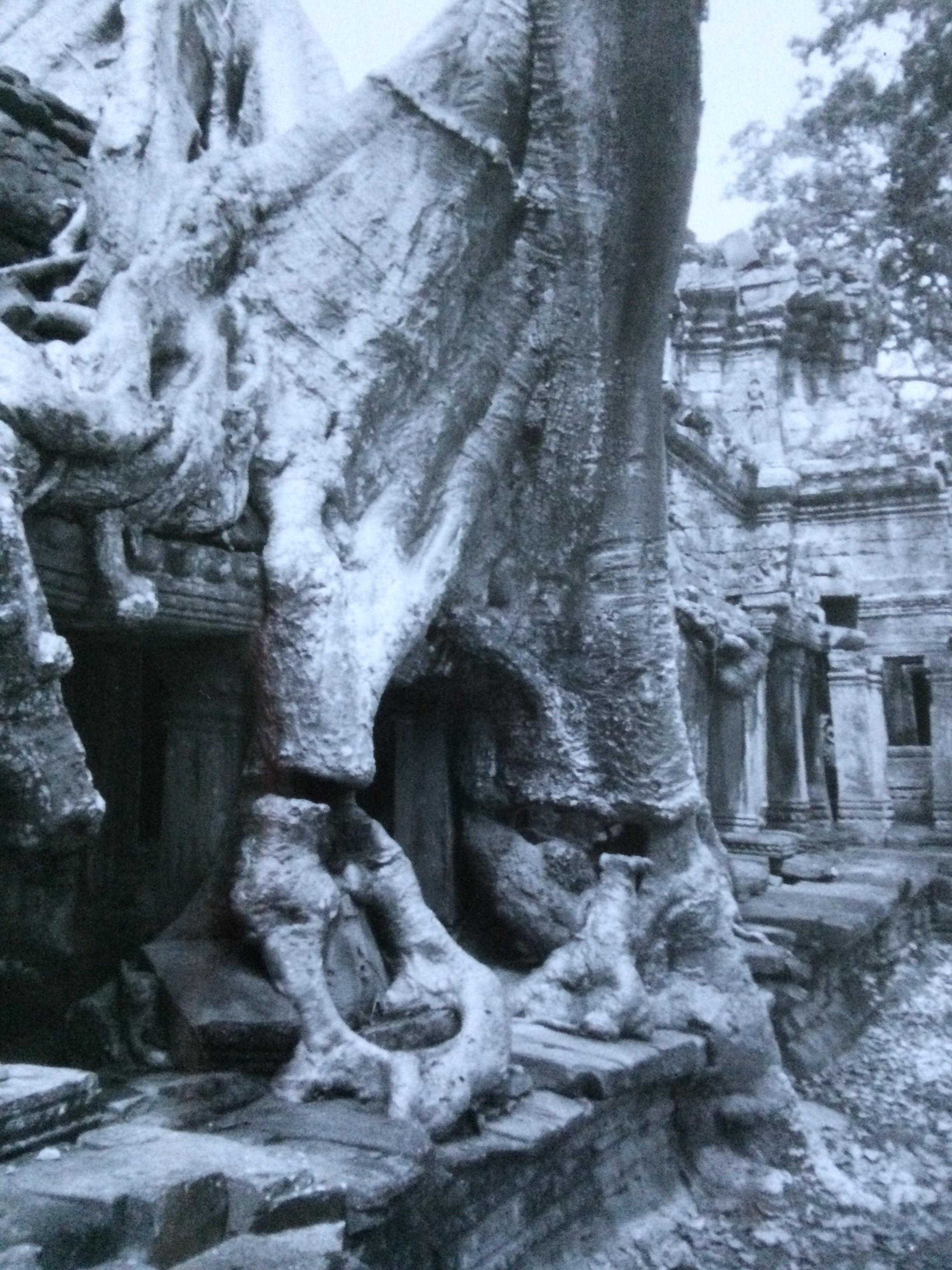 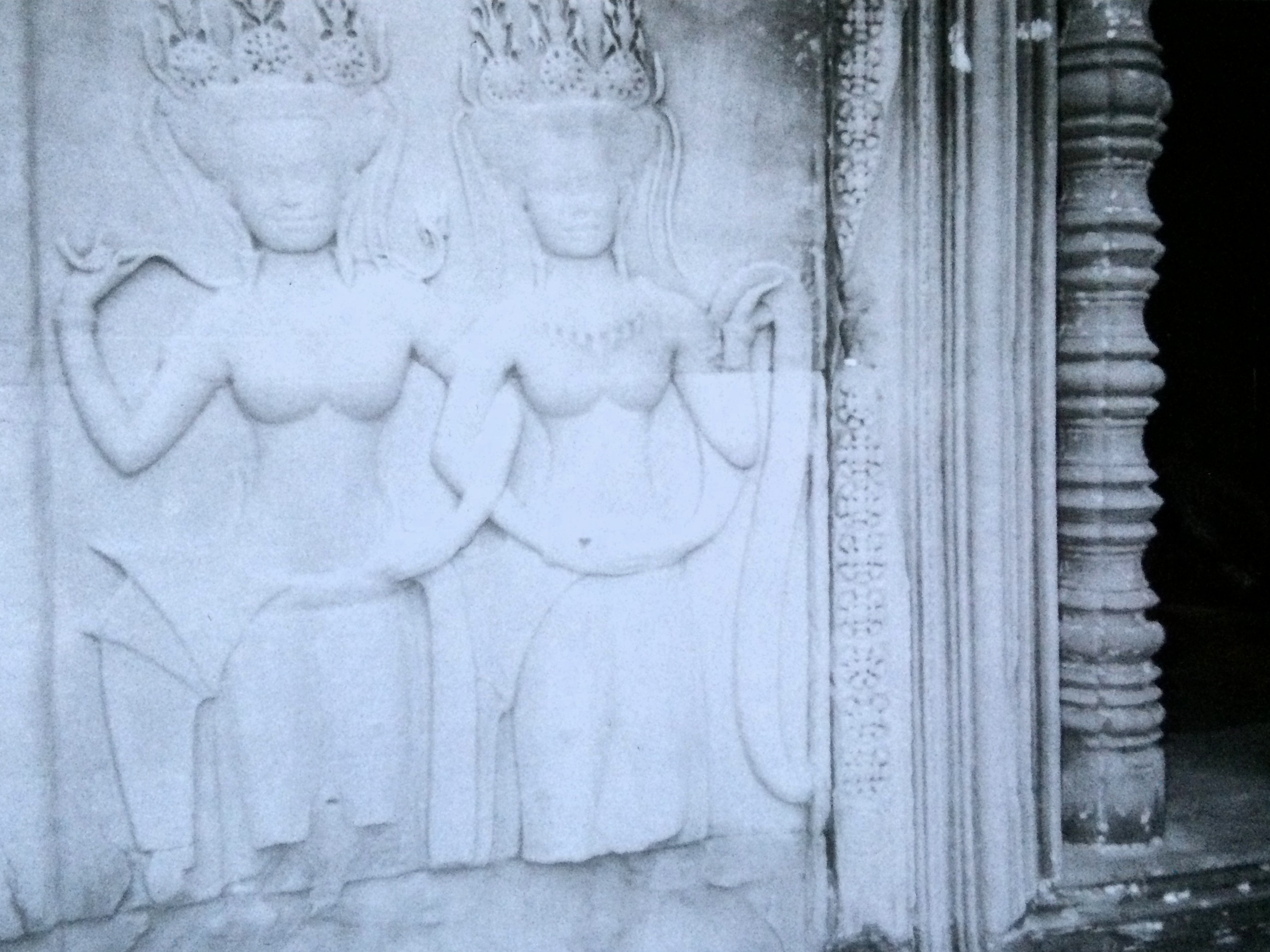 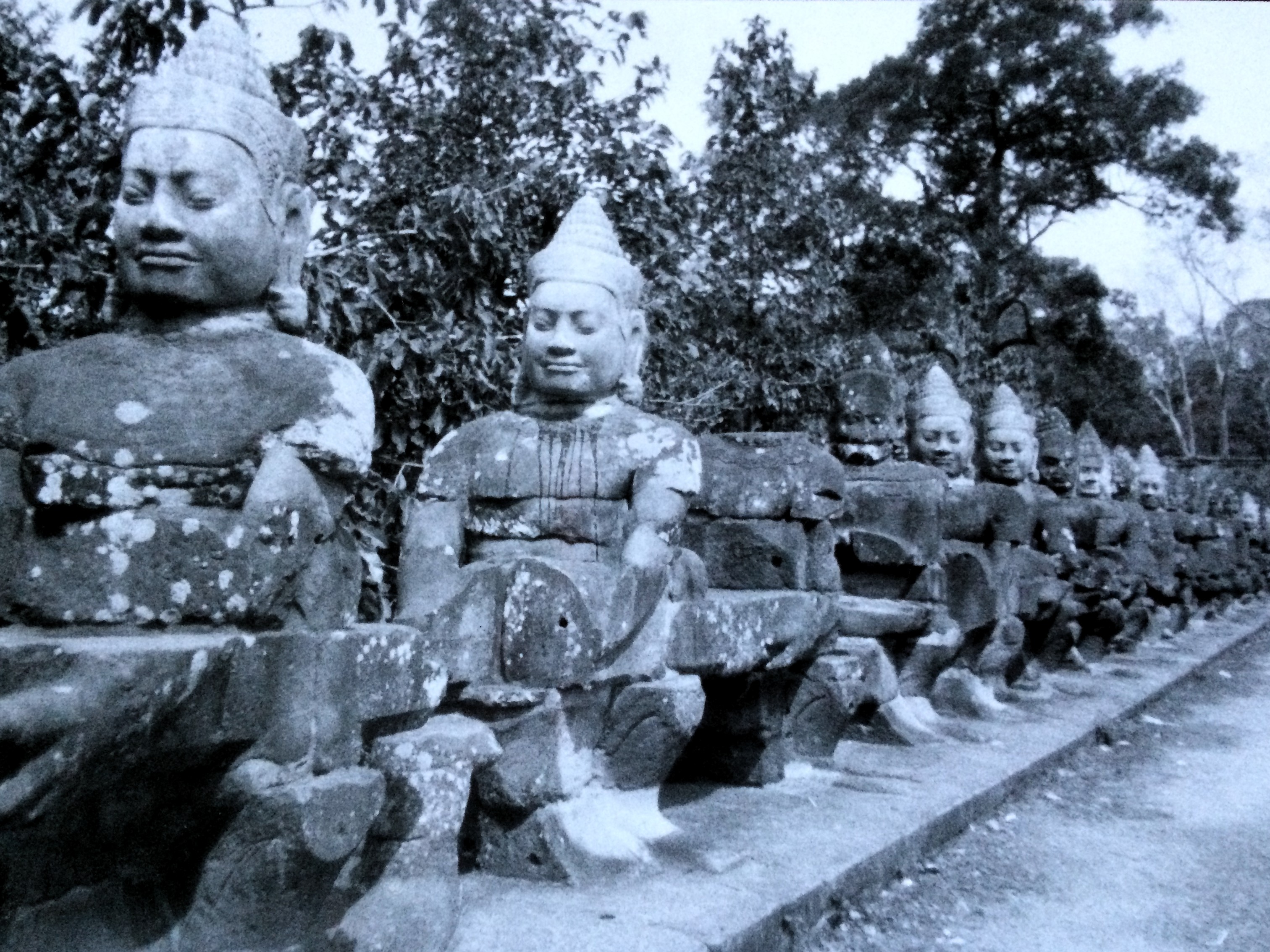 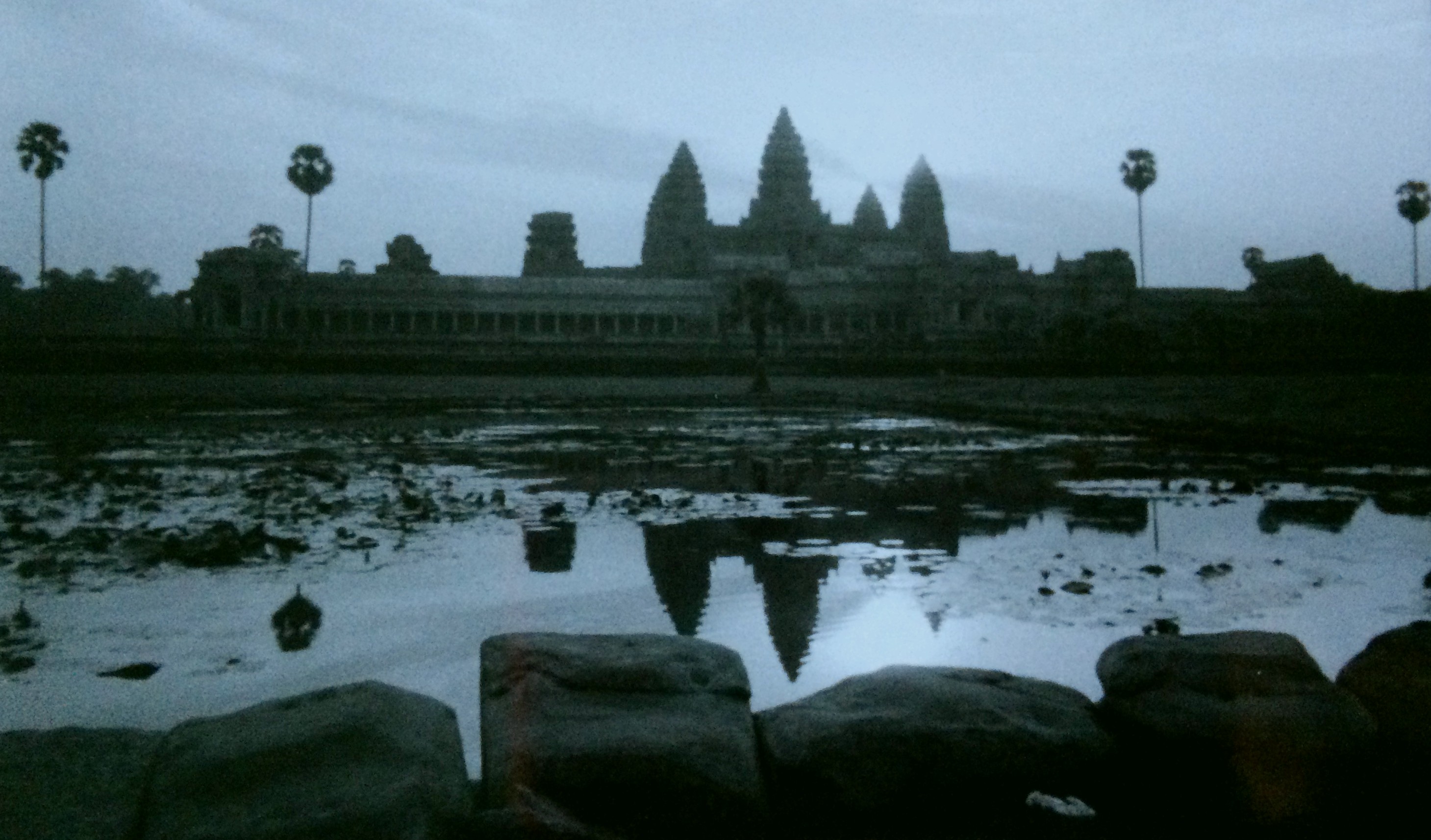 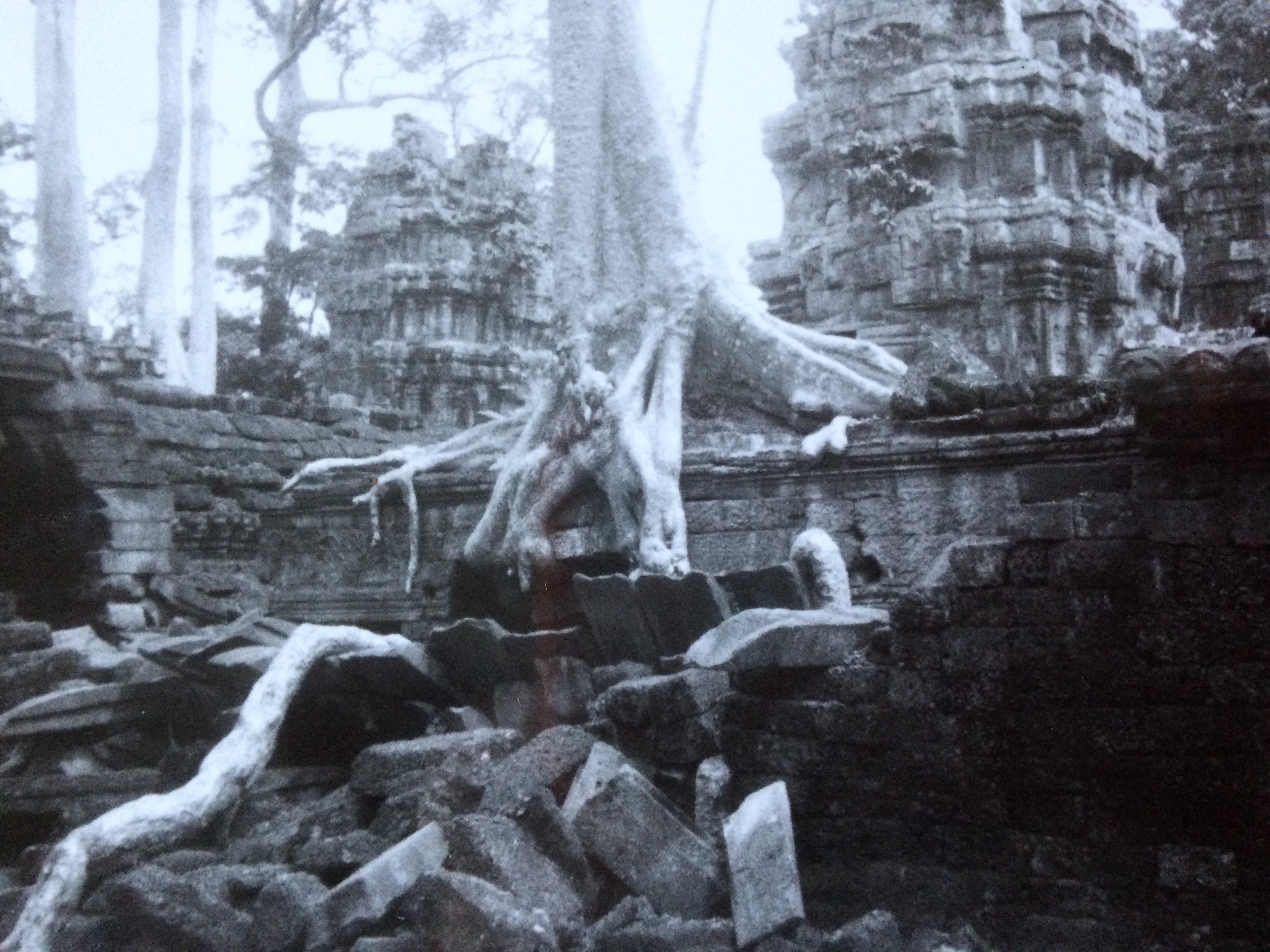 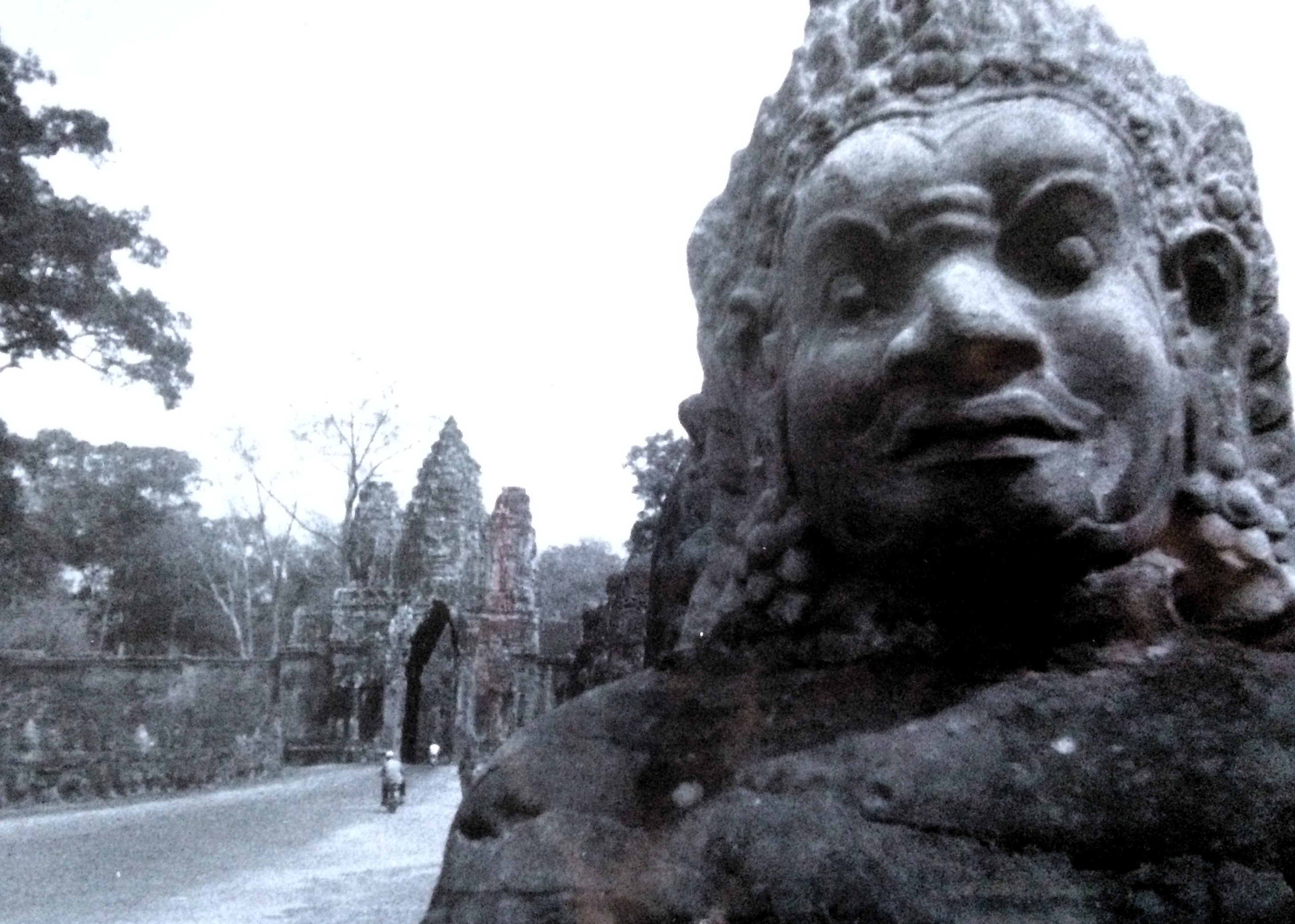 A selection of sketches from Angkor 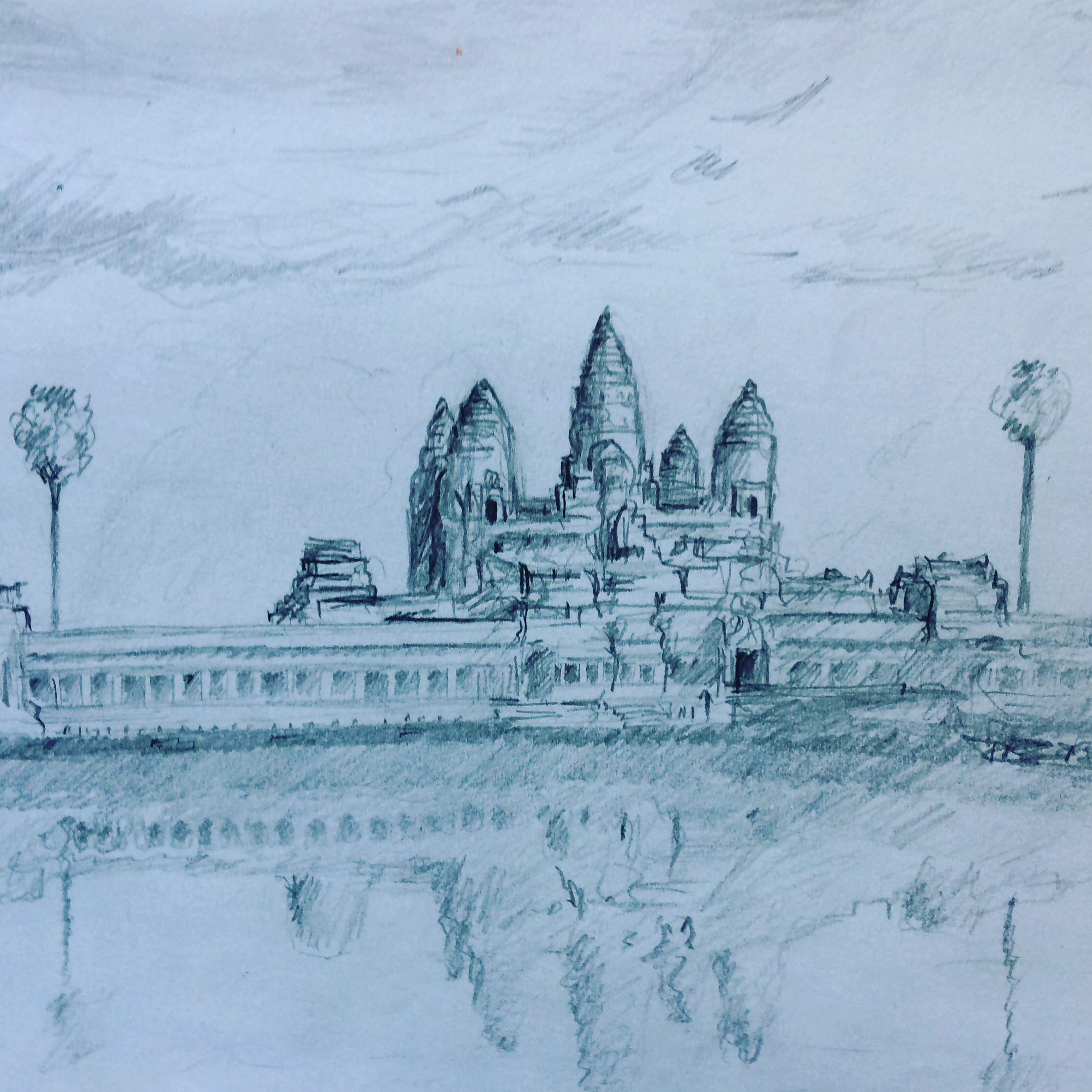 Sketch of Angkor Wat in from my Cambodian sketchbook 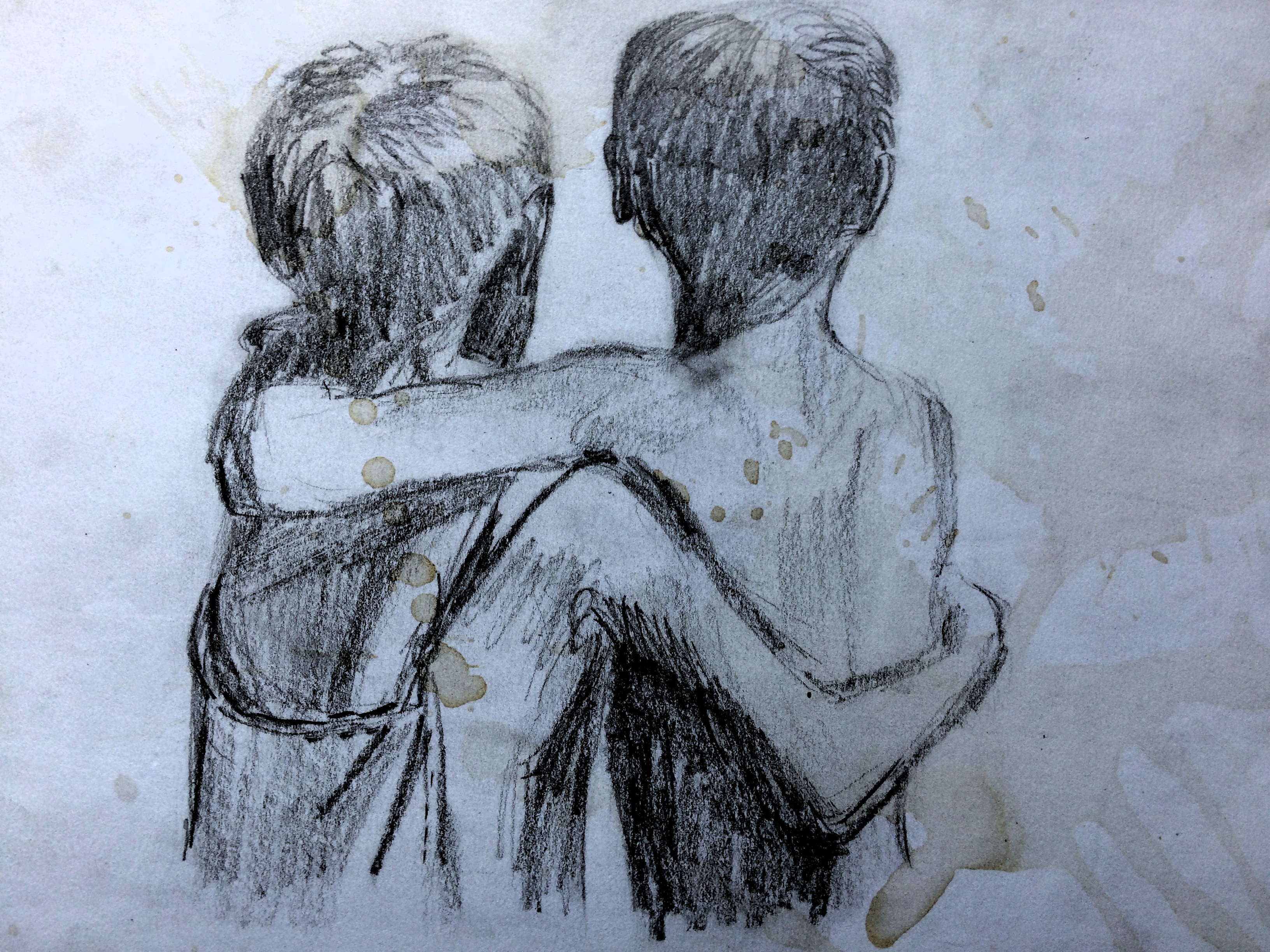 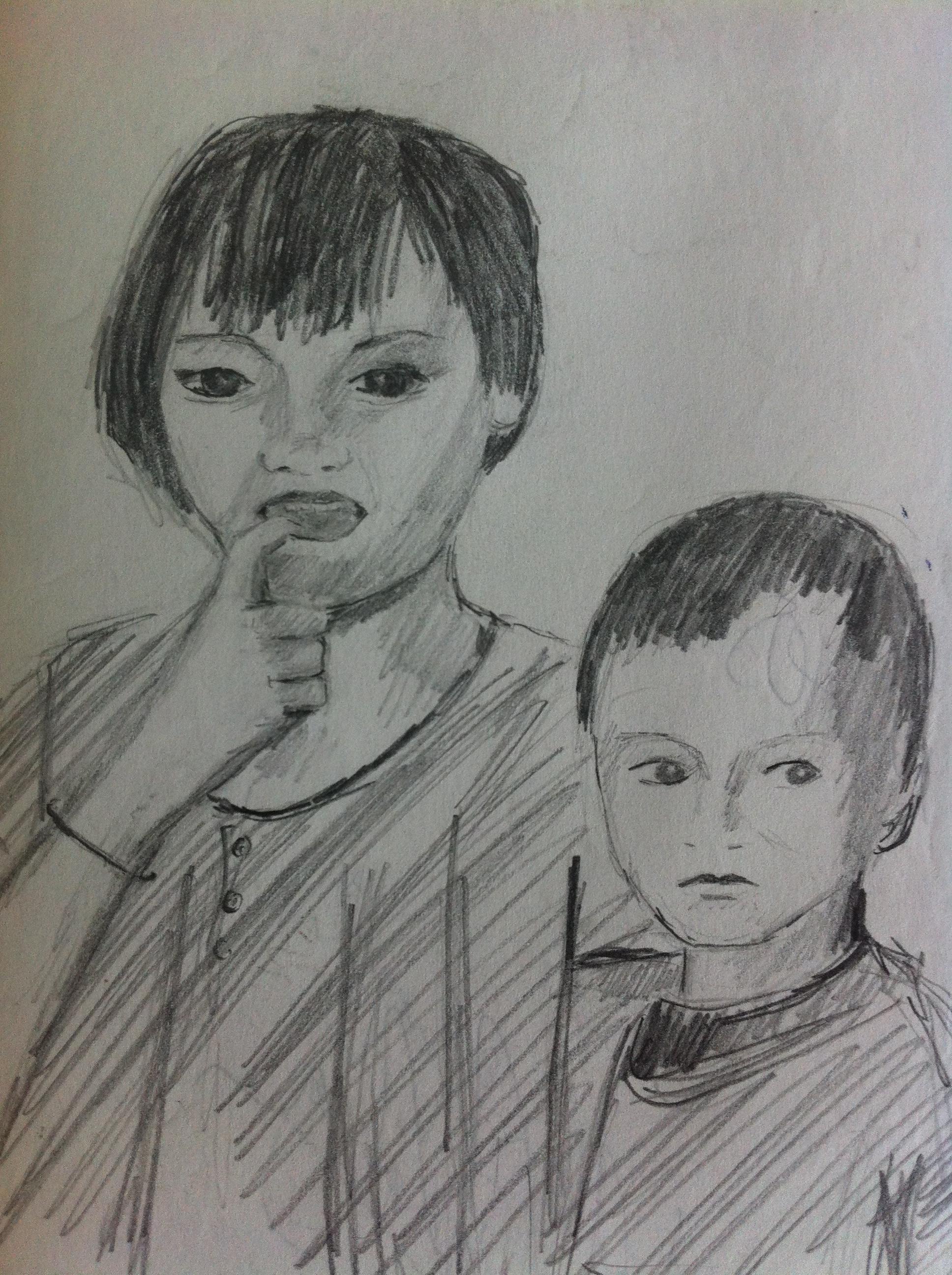 Kids hanging around the temples at Angkor from my Cambodian sketchbook 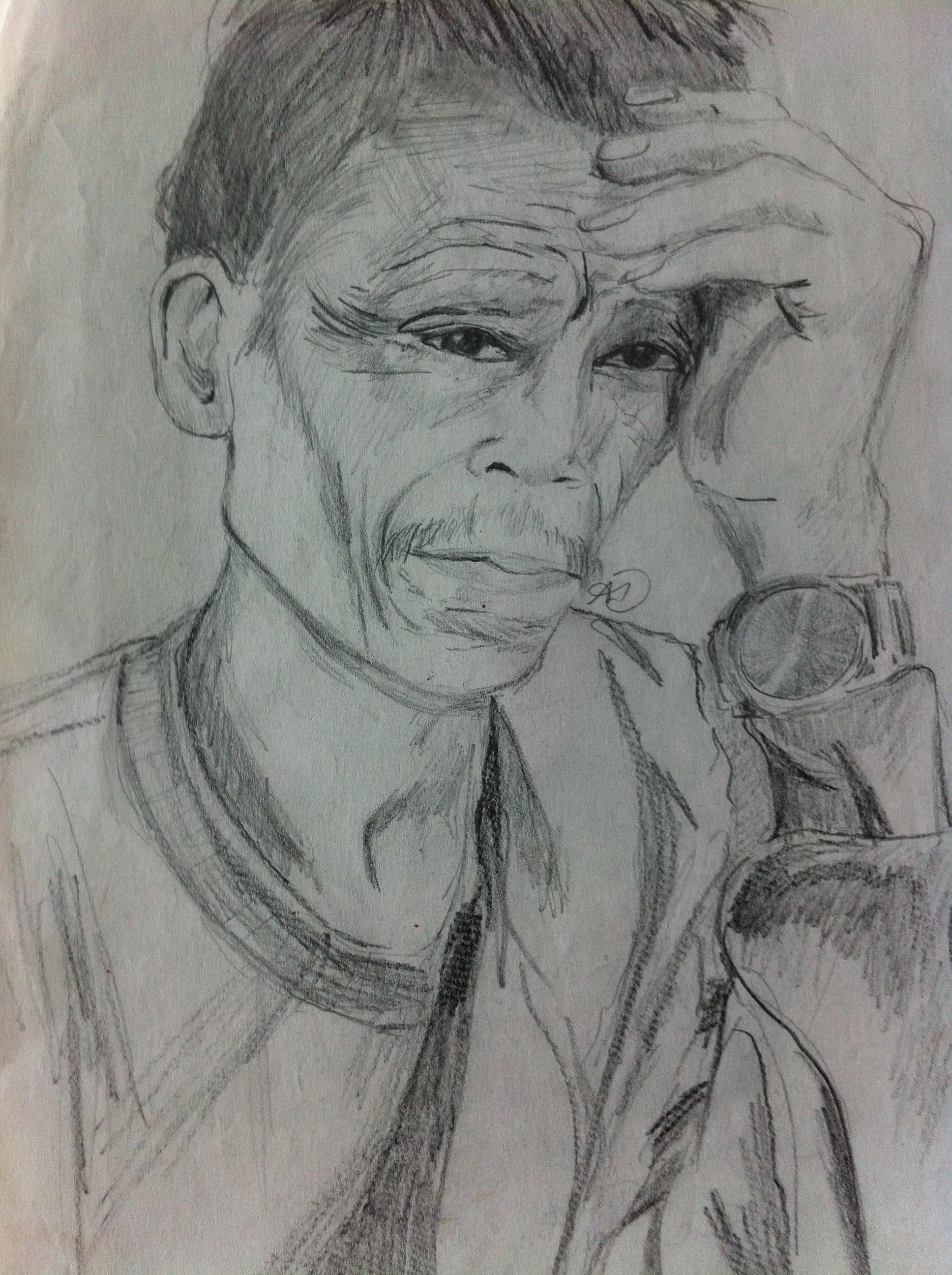 Sketch of a man at Angkor from from my Cambodian sketchbook 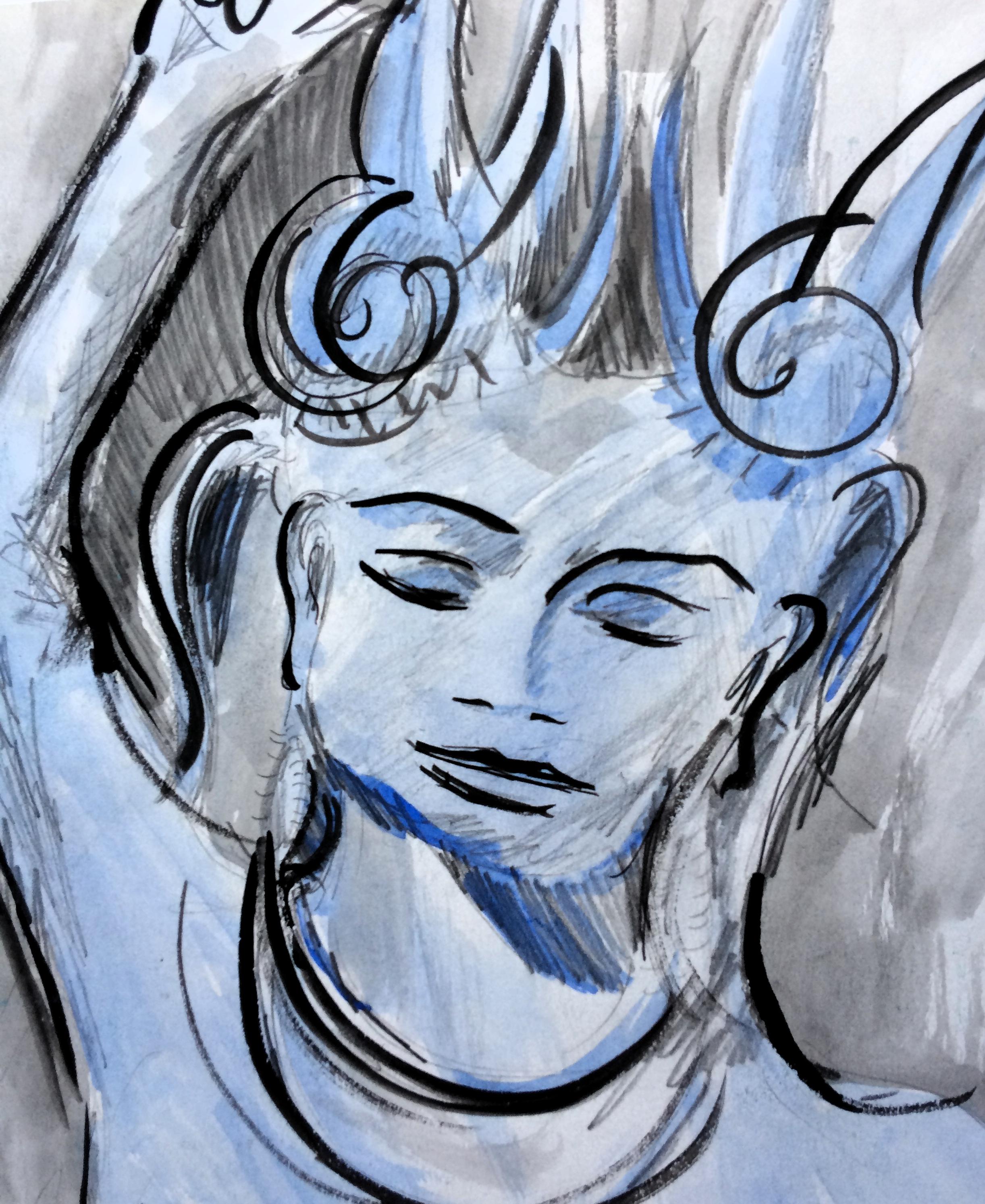 Apsara from the walls of Angkor Wat from my Cambodian sketchbook 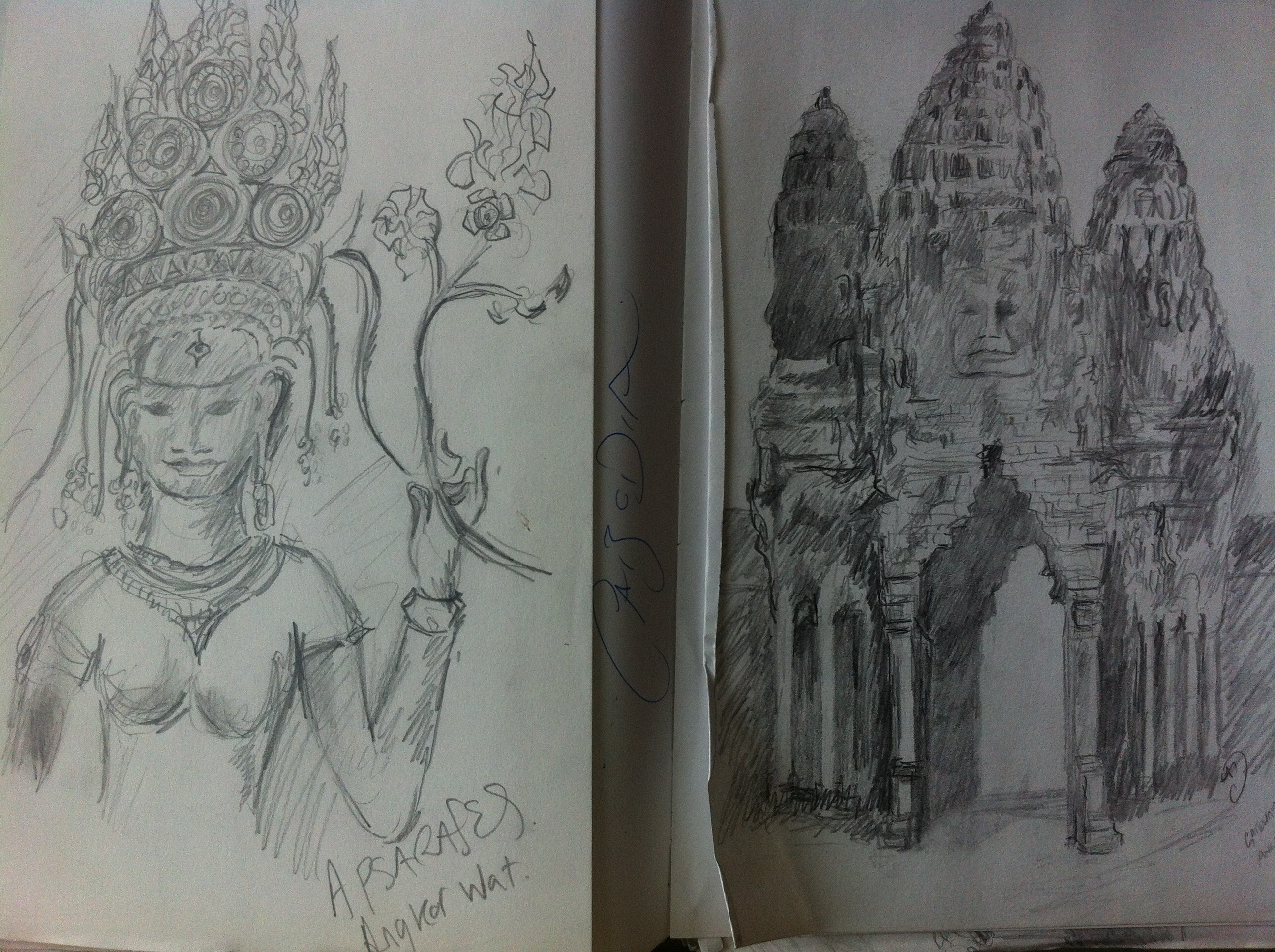 Page from my Cambodia sketchbook. Ali sat on the steps of Angkor Wat in Cambodia