In the away end at Stockholm’s Twin Football Derby

Before I write anything in this blog post I need to confess that I am not a football fan. But I am a fan of events that have an exciting atmosphere. So this was how I was enticed into the away end at one of the biggest matches in Scandinavia.

When Stockholm’s cross-town rivals Djurgården and AIK play it is called the Tvillingderbyt, “The Twin Derby”. Both clubs were founded in Stockholm in 1891, just three weeks apart. This football fixture was being played at AIK’s ground, The Friends Arena.

My husband had a spare ticket for the match and promised me that it would be an experience I would never forget. As we were supporting Djurgården we would be in the away end. 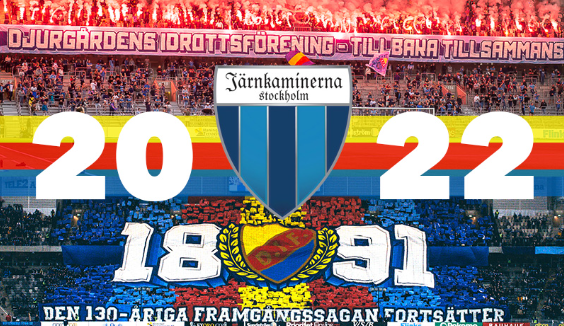 It was important I was wearing the right colours, so I donned obligatory dark blue and light blue Djurgården football scarf and shirt.

Joining members of the supporters club at Odenplan

I will be honest, it was a bit of a shock when we arrived at Odenplan to meet up with members of Järnkaminerna, the Djurgården supporters club. Roads had been closed, there was a high police presence and there were hundreds of fans singing, shouting, chanting and lighting flares. One guy in a hoodie and balaclava had climbed up onto the top of the traffic lights and was leading chants through a loud speaker. The atmosphere was great, but it was more like a political rally.

Fans jumping up and down on the packed train

The fans were waiting to be transported to Solna’s friends Arena by trains which are put on only for the Djurdården fans. At one o’clock exactly the police started to move the fans down to the tunnelbana. It did look like a sea of football hooligans, but because it had been well organized by the police, people were calm and there did not seem to be any ‘edge’.

Odenplan tunnelbana was now rammed with fans who were being put on the designated trains. I had become familiar with many of the chants, but there was another one which they saved for the busy train:

Roughly translated this means ‘all who do not jump are a rodent pig‘. A seamlessly innocent song, but when you are packed like sardines in a tin on a train and people start singing it, it becomes little unnerving. Everyone shouts, chants, jumps and bangs on the walls and the ceilings. Thank god it was only one stop to Solna.

The atmosphere in the stadium in the lead up to kick off was amazing, with huge club flags everywhere and flares being set off left, right and centre.

As I said earlier, I’m not a football fan, so the actual game was not as much fun as the lead up and pre-match banter. Also for me to write a review of the match would be cringeworthy at best. Full time score was 1-0 to AIK, although from what I saw Djurgården had more possession and shots on goal. I wish I’d have seen Djurgården score, as I know the away end would have exploded. I think it is safe to say ‘we woz robbed.’